And Should Your Company Bother with This Platform in 2020? 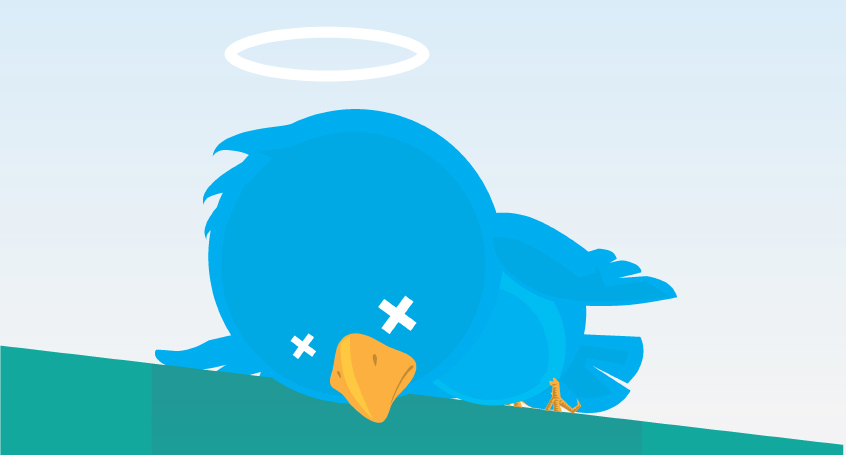 Short answers: no, it’s not dead, and yes, you should bother (probably).

(If that were the end of this blog, it’d be short enough to tweet—even back in the days of 140-character limits!—but we’ve actually got a lot more to say on this topic.)

Whether you’re a brand marketer yourself or you’re someone looking to promote a company, product, or service through social media channels, you’ve probably heard the complaints and frustrations about Twitter. Today we look at whether those grievances are really founded and how you should determine whether to take your brand and your business to seemingly greener cyber-pastures. 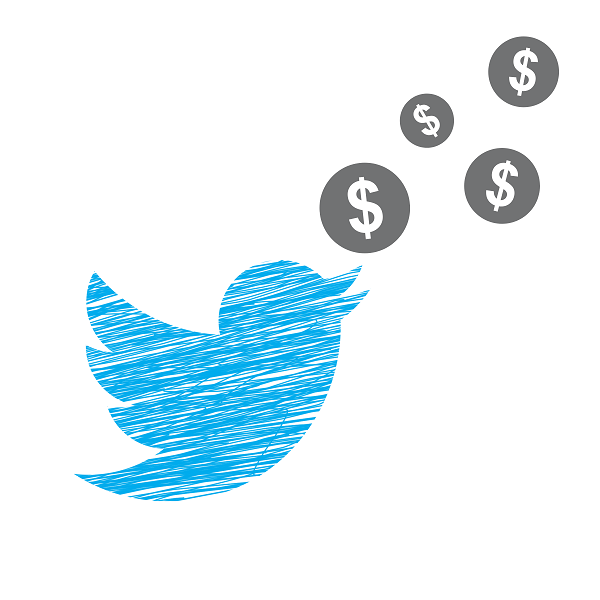 One of the reasons social media launched such an advertising revolution is because anyone could post for free. In the early days, you could get in front of your audience and deliver your message without paying for print ads, television spots, or radio promotions. It all seemed too good to be true.

As every mom-and-pop store caught on, though, the space became crowded, noisy, and diluted. Good-bye, days of getting in front of your audience for free; hello, age of promoted posts and paid advertising.

In this environment, it wasn’t long before people began to wonder if the expense was worth it. Were they seeing a return on investment (ROI)? The prevailing sentiment became that Twitter was more expensive and less effective than other social media platforms, including Facebook.

Let’s see how that conception stacks up to the data:

There’s no arguing that Facebook has the market cornered on network reach. As of the first quarter of 2019, Facebook boasted over 2.3 billion monthly active users sharing around 54,000 links every. single. minute. Twitter has over 330 million monthly active users who post about half a billion tweets daily. Not bad, but it pales in comparison to the goliath of Facebook.

That being said, Twitter, with its nearly third of a billion users, isn’t exactly a wasteland. If you can find, target, and engage with an audience here, it can prove financially worth the effort.

Projecting data out to the future is inherently speculative, but if these trends keep up, it wouldn’t be shocking for Twitter to quickly catch up to Facebook on this metric.

The median CPC on Twitter in the first quarter of 2019 was $0.49; on Facebook, that number was $0.63. (Do you love to dig through data? Here’s some more info about the cost of advertising on Twitter, and here are the numbers for Facebook.)

It’s important to remember, however, these are median numbers. They can vary greatly based on numerous factors, including your particular vertical.

Does the Rise of Bots Mean the Downfall of Twitter? 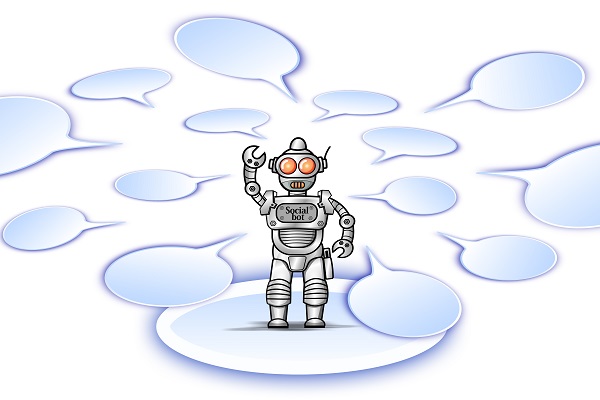 Another persistent complaint from Twitter users is the prevalence of bots, trolls, and otherwise abusive or malevolent accounts. In a sixteen-month study that analyzed 1.5 billion tweets, University of Iowa computer science professor Zubair Shafiq identified roughly 167,000 apps that use the Twitter API to automate bot accounts. These accounts then push spam, malware links, and astroturfing campaigns through tens of millions of tweets. An estimated 48 million bots live and operate on Twitter.

Tell this to anyone who consistently uses the platform, and you’ll get the unmistakable “everybody-already-knows-that” expression. Bots have essentially become a nuisance that users must deal with if they want to engage on Twitter, and they show no signs of going away. Shafiq’s detection method flagged an account as malicious after a handful of tweets; Twitter waits until over one hundred tweets before banning an account. In that lag, millions of malicious automated tweets are allowed to go out.

Twitter, in its current state, looks ill prepared to handle this deluge, but like all evolving entities, it will change and respond with time—especially if it starts losing its base. Twitter, for its part, objects to the study’s findings and emphasizes the actions it has taken, including the banning of politically motivated disinformation accounts (4,000 from Russia, 3,300 from Iran, and 750 from Venezuela).

How to Get the Most from Your Twitter Effort 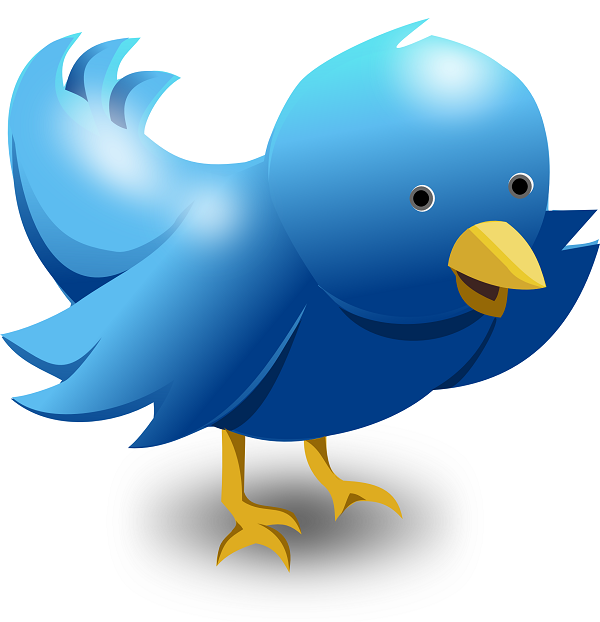 Given all this, it’s clear Twitter isn’t without its hurdles and issues, but it can be positive for your brand—when used effectively.

Inspiring and Engaging in Human Conversations

Twitter isn’t necessarily the place to talk endlessly about you and your brand and how great you are. Twitter, even more so than other social media platforms, is a much more interactive, dialogue-based medium. If you find ways to genuinely engage in conversation with users, you can find a lot of value here. Start conversations people want to be a part of, and you’ll see your engagement skyrocket.

Initiating a dialogue people are interested in is largely about offering a relevant, timely topic. Twitter is about being present in the cultural moment and keeping your finger on the pulse of what’s trending. For the best engagement and results, brand marketers should focus on what’s happening now. In this way, the platform is somewhat reactive, but if you weigh in early on a topic, you can lead some meaningful dialogues with your targeted audience.

Leveraging the Followers of Influential Users

In terms of tweet visibility, one of the best things about Twitter is the retweet feature. If you can get an influential person to retweet you, your post becomes visible to that person’s entire following. You don’t necessarily need to get Starbucks to give you some love (with its more than 11 million followers), but recognition from an even marginally popular user can be huge for your account.

Because Twitter is built around these concepts of dialogue and human interaction, authenticity is at a premium, and it’s often rewarded well. The more authentic and human you are on this platform, the more likely you are to get genuine engagement that leads not only to brand recognition but the conversion of followers into customers.

Putting It All Together: Examples of Businesses Killing It on Twitter

The first lesson to take from Warby Parker, a retailer of sunglasses and eyeglasses, is that they have one general Twitter account (@WarbyParker) and a dedicated help account (@WarbyParkerHelp). In this way, the company can more quickly and effectively respond to customer queries.

They’ve also got the personal touch down to a science. With their #HomeTryOn campaign, customers could try on glasses and tweet the company for expert and personalized advice. 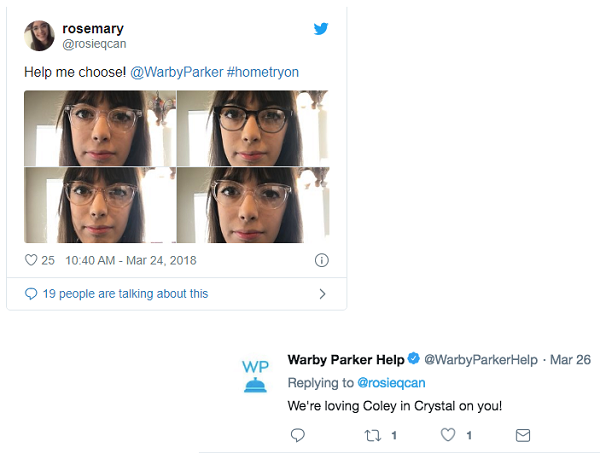 Beauty brand Glossier (@glossier) nails the fun, light, accessible vibe that works so well on Twitter. Users feel comfortable reaching out to the brand, and Glossier is rewarded with customers who feel more aligned to the company. 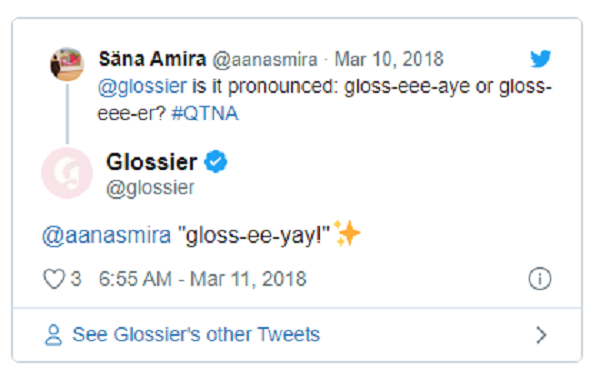 We love the social media game of this juice and smoothie company! Their branding is quirky, loveable, approachable, and totally human.

In this tweet, they endear themselves to readers by acknowledging their more transparent and overt attempts to sell their followers juice: 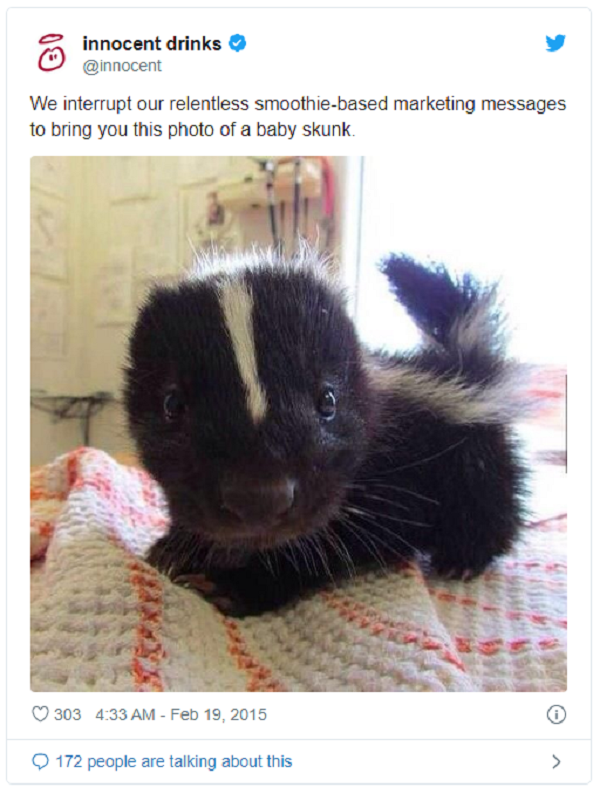 You might just think of them as another frozen pizza company, but their Twitter presence makes them king! Back in 2013, the company live-tweeted The Sound of Music, and it was weird in all the right ways: 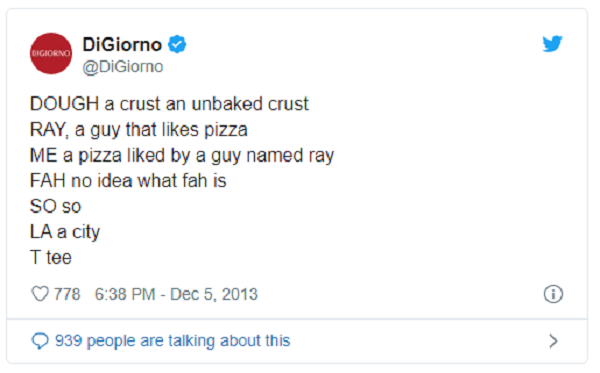 It wasn’t just good for a few laughs either. By jumping on the popularity of #TheSoundofMusicLive, the company earned 44 million social media impressions that week and landed more than four thousand new followers. (Remember, Twitter can be gold for those who are savvy about following trends!)

Don’t Force a Square Peg into a Round Hole 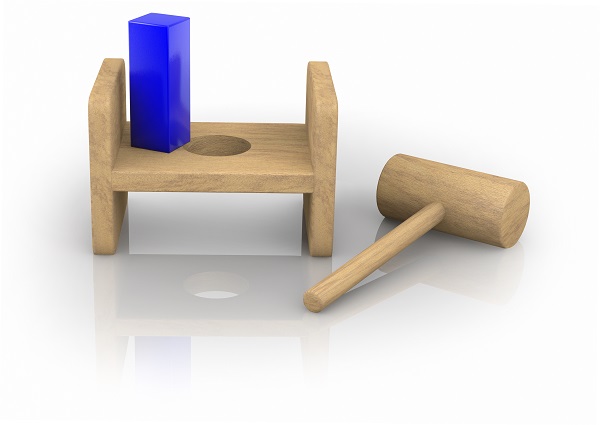 It’s important to note here that just because Twitter is alive and well for some brands, it doesn’t necessarily mean it’s for everybody. By investing a little bit and carefully examining the advertising modules for results, you can ascertain if the platform speaks to your customers’ interests and if your client base (or potential client base) is present enough to make the effort and expense worth it.

A lack of results doesn’t necessarily mean you’re navigating the platform ineffectively or driving the machine incorrectly. If it’s not where your clients are conversing and sharing, it doesn’t matter how deftly you utilize the platform. Your brand simply might not need Twitter, and that’s OK.

So, to recap: no, Twitter isn’t dead, and yes, you should bother. Probably.